Nigerian Finger Food | Popular Finger Food in Nigeria: The Nigerian party without finger food is incomplete. Finger foods are commonly referred to as small chops in Nigeria. They serve as appetizers, preparing the palate for the main dish.

Nigerian finger food/small chops can also be enjoyed as a stand-alone snack. They range from meaty dishes such as gizdodas to pastry foods such as sausage rolls and sweet snacks such as doughnuts or chin chin. We’ve compiled 10 of the most delicious Nigerian finger food people in the world are missing. 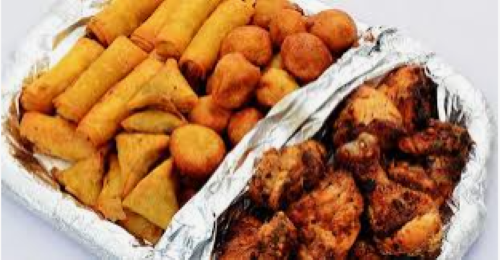 Asun is a slice of spicy goat meat that is particularly served at parties. Asun has a distinct aroma, thanks to the goat flavor that could wake you up from sleep if it was being cooked in your neighborhood. The goat is usually grilled in an open barbecue and eventually chopped into tiny bits of deliciousness.

In Nigeria, night time is the perfect time for suya. Made popular by mallams of northern Nigeria, this beef kebab can be seen sold in various parts of a street. They are cheap and often sold in newspaper wraps alongside side fresh red onions and a special spice blend called yaji.

The yaji gives it a distinct aroma/taste that differentiates it from other basic peppered grilled meat. Suya has also evolved to be used as a pizza topping in some restaurants as well as a filling for dishes that require meat fillings.

Puff Puff is a sweet, deep-fried dough in vegetable oil. It’s probably one of Nigeria’s favorite small chops, if not the best. This sweet fluffy snack is made from the simplest ingredients—flour, yeast, sugar, water, nutmeg—but it has the potential to take your palate on a beautifully tasty ride.

Not all of Nigeria’s small chops originated in the West African region. One of these is Samosa, which originated in the Middle East. It is a fried thin dough film that contains goodies, such as beef, garnished with onions, peppers, potatoes, and some vegetables. It is also served at parties alongside puffs, spring rolls, and spicy grilled chicken. It’s pretty much a fried Nigerian meat pie, but with a thinner layer of dough.

Spring rolls are part of the traditional set of small chops. Just like Samosa, they didn’t originate in Nigeria, they’re an Asian appetizer that Nigerians have come to love and feature in virtually every party.

Gizdodo is a blend of two delicious Nigerian food – gizzard and dodo (fried plantain) that are delicious on their own. Gizzard and plantain are fried separately until they are sautéed together in a pepper sauce. Nothing spells Y-U-M-Y as often as the gizdodo (yes, not even those five letters).

The meat pie is a delicious pastry dish made with a thick dough, and meat, and vegetable fillings. It’s easily one of Nigeria’s most common comfort snacks. It is either accompanied by ice cream or a chilled soft drink. There are other similarly tasty variants, such as fish pie and chicken pie, which are made in the same way.

Chin Chin is a deep-fried snack made from simple baking ingredients such as baking flour, sugar, milk, and so on. The conventional way to make this crunchy delight is to cut it into strips or cubes and deep-fry it. Meanwhile, some can go the healthier way by baking it.

Sausage Roll is a pastry food made from sausage, baked in a roll of dough. It was originally a British snack that made its way to Nigeria. They are made like meat pie they can be referred to as meat pie cousins. They are mostly sold near shops and restaurants.

A club sandwich, also called a clubhouse sandwich, is a sandwich of bread, sliced cooked poultry, ham or fried bacon, lettuce, tomato, and mayonnaise. It is often cut into quarters or halves and held together by cocktail sticks.

However, do not hesitate to submit them using the comment section if you have any contributions or questions to ask on this subject.